When we look at the harsh world, when we observe creatures such as insects and animals, it is really a dog eat dog world. It’s a harsh nasty world out there where animals will main and kill each other to survive.  Charles Darwin on his process of discovery ran into this as well and it confused him.

I cannot persuade myself that a beneficent & omnipotent God would have designedly created the Ichneumonidae with the express intention of their feeding within the living bodies of caterpillars, or that a cat should play with mice. — Charles Darwin

Here is a picture of the wasp he was referring to: 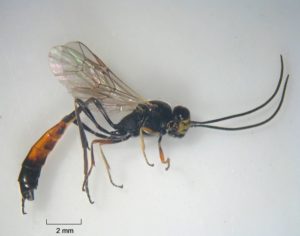 To understand, these wasps larvae develop inside the living animal and eat it from the inside alive.  It’s quite disturbing.

As a friend Hassan Radwan said,

I agree. I would have opted for less blood and gore.  The animal kingdom is so gruesome.  Most of it seems so unnecessary and horrible.
Of course there is a perfectly good explanation for all this.  God did not design it in such a way.  It simply evolved this way.  There is a lot of good evidence for evolution.