One of the most troubling issues with Islamic morality comes from the Quran’s explicit permission to have sex with female captives of war. Muslims claim that Islam came with the perfect moral system and way of life, and that Prophet Muhammad was the primary example of this type of perfection. How can you square this with the fact that it allows taking advantage of vulnerable women who are slaves of war?

If slavery was truly inevitable (which it wasn’t), wouldn’t it have been morally superior that the Quran insisted that you cannot have sex with female captives but rather you have to marry them first? This simple change would have improved the lives of countless victims of slavery.  Women who are captives of war are in a vulnerable situation where they would not be able to consent. If Allah or Muhammad would have insisted that their rights be protected and they were married first, this would have been a million times better than what we have now.

Even today, 1400 years later, NY Times has reported that ISIS uses sex slavery as a recruiting tactic.  This is the heritage of Islam and Muhammad.  This is what he has brought to our world. A poisonous ideology that is not going away.

Allah says in the Quran,

Also this is repeated in Surah Muminuun:

I saw Abu Sa`id and asked him about coitus interruptus. Abu Sa`id said, “We went with Allah’s Apostle, in the Ghazwa of Bani Al-Mustaliq and we captured some of the ‘Arabs as captives, and the long separation from our wives was pressing us hard and we wanted to practice coitus interruptus. We asked Allah’s Messenger (ﷺ) (whether it was permissible). He said, “It is better for you not to do so. No soul, (that which Allah has) destined to exist, up to the Day of Resurrection, but will definitely come, into existence.”

Allaah has permitted intimacy with a slave woman if the man owns her. This is not regarded as adultery

Shaykh al-Shanqeeti (may Allaah have mercy on him) said: The reason why a person may be taken as a slave is his being a kaafir and waging war against Allaah and His Messenger. If Allaah enables the Muslims who are striving and sacrificing their lives and their wealth and all that Allaah has given them to make the word of Allaah supreme over the kaafirs, then He allows them to enslave the kuffaar when they capture them, unless the ruler chooses to free them or to ransom them, if that serves the interests of the Muslims.

If a mujaahid takes possession of a female slave or male slave, it is permissible for him to sell them. In either case – whether one acquires a slave through battle or through purchase – it is not permissible for a man to have intercourse with a female slave until she has had a period from which it may be ascertained that she is not pregnant. If she is pregnant then he must wait until she gives birth.

Is it too much to ask that Prophet Muhammad not partake in the slave trade and enjoying personal benefits (sexually and otherwise) from slavery?

Is it too much to ask that Allah would have asked Muslim men to free and marry their female slaves first before having sex with them?

There is a story about him sleeping with some of his female slaves and making certain wives angry, but that is a story for another day.

Slavery also had continued in the Muslim world almost until the 20th century.

Arab slave trade was the practice of slavery in the Arab world, mainly in Western Asia, North Africa, Southeast Africa, the Horn of Africa and certain parts of Europe (such as Iberia and Sicily) beginning in the era of the Roman Empire and continuing until the early second half of the 20th century. The trade was conducted through slave markets in the Middle East, North Africa and the Horn of Africa, with the slaves captured mostly from Africa’s interior.

Back when I was Muslim, many many years ago I had a fellow Muslim brother (who was in Hizbut Tahrir) tell me that in Islam, the awrah for slave girls does not include their chest.  Thus some slave girls were not allowed to cover their chests. Apparently they even have a fatwa about this. I was really shocked when I heard this. 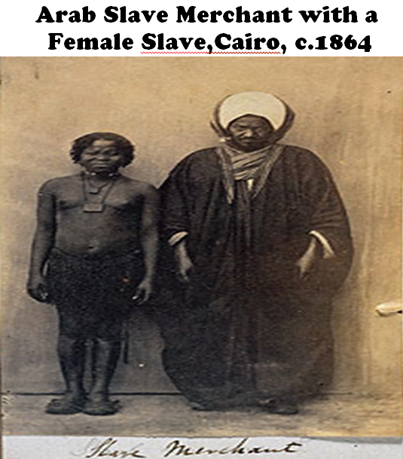 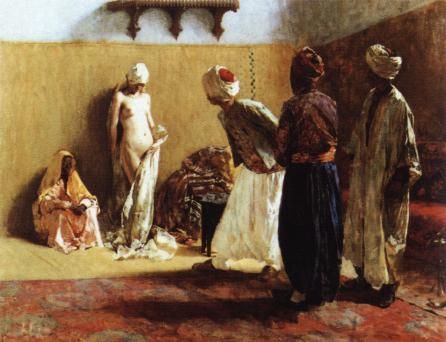 Apparently there is evidence for this claim:

Narrated through Hamad Ibn Salama from Thamana Ibn Abdullah Ibn Anas from his grandfather Anas who said: “The slave-girls of Umar were serving us with uncovered hair and their breasts were shaking/wobbling ( تضطرب).”

Al-Albani: The chain of this Hadeeth is ‘Jayyid’ (at a level between Hasan and Saheeh) and all of it’s narrators are trustworthy except the teacher of Bayhaqi Abul Qasim Abdul Rahman Ibn Ubaidullah Al-Harbi and he is very Truthful as Al-Khatib says and Al-Bayhaqi said: “And the reports from Umar Ibn Al-Khattab concerning that matter are authentic.”

Umar hit the slave women from the family of Anas ibn Malik, when he saw them covered and said, “Uncover your head, and do not resemble the free women.” – Abd al-Razzaq al-Sanani (d. 211 AH/826 CE) in Al-Musannaf.   (Arab women pre-islam)

And here is another reference. The prominent Hanafi jurist, Imam Ibn Abidin (Allah have mercy on him) provides us with answers to these two questions in his authoritative work, Radd al-Muhtar.

Imam Ibn Abidin (Allah have mercy on him) expounds on the issue of a slave-woman’s Awra. He states here and in another chapter of his work that the Awra of a slave-woman (excluding one’s own) is similar to the Awra of a Mahram woman, in that it is permissible to see of a slave-woman that which is permitted to see of a Mahram woman. The area between the navel up to and including the knees was understandable but there was a need to define the stomach and back. As such, he clarifies what precisely is meant by the stomach and back and stipulates clearly that the chest including the breasts and the area parallel to the chest from the back are not considered to be part of the Awra of a slave-woman and a Mahram. Thus, strictly speaking, it is not necessary for a woman to cover these parts in front of a Mahram male.

Similarly, it is stated in al-Fatawa al-Hindiyya:

“It is okay for a man to see from his mother, mature daughter, sister and all other Mahram women such as grandmothers, grandchildren, paternal and maternal aunts, at their: hair, chest, locks, breasts, forearms (shoulders) and shins. It is not permissible to look at their back, stomach and the area between the navel and (including the) knees.”(Al-Fatawa al-Hindiyya, 5/328)

We read in Sunan al-Kubra by Imam Beyhaqi:

عن نافع ، عن ابن عمر ” أنه كان إذا اشترى جارية كشف عن ساقها ووضع يده بين ثدييها و على عجزها
Nafe’e narrated that whenever Ibn Umar wanted to buy a slave-girl, he would inspect her by analysing her legs and placing his hands between her breasts and on her buttocks”

أن ابن عمر كان يضع يده بين ثدييها ( يعني الجارية ) وعلى عجزها من فوق الثياب ويكشف عن ساقها
“Ibn `Umar (ra) used to put his hand between her [meaning the jariya’s] breasts and on her haunch from above (her) clothes and used to unveil her leg.”

In an Islamic system in Medina there were women walking around bare breasted, and that is a fact, that is a historical fact and you can read it and look it up in the books.  Umar did not allow the ima (slave girl) to wear the hijab.  Source: Video on Youtube at 1min 16seconds

I find this quite strange, you can look at her breasts but not her stomach?

It is haraam for a slave to marry his mistress. Ibn al-Mundhir said: The scholars are unanimously agreed that marriage of a woman to her slave is invalid. Al-Athram narrated, with his isnaad from Abu’z-Zubayr, who said: I asked Jaabir about a slave marrying his mistress, and he said: A woman came to ‘Umar ibn al-Khattaab, when we were in al-Jaabiyyah. She had married her slave, and ‘Umar rebuked her and thought of stoning her, and he said: He is not permissible for you.

If a woman owns her husband [i.e., if he is a slave or she bought him, for example], her marriage becomes invalid. End quote.

You can sell your slaves you impregnated

In the following hadith the prominent companion Jabir admits that they used to sell the slaves they had children with and they saw no problem with that:

Jabir bin `Abdullah was heard to say:
“We used to sell our slave women and the mothers of our children (Umahat Awaldina) when the Prophet (ﷺ) was still living among us, and we did not see anything wrong with that.” (Ibn Majah)

In conclusion, the Quranic injunctions that allow men to sleep with their female captives of war are morally reprehensible. There is no way a just and loving god would allow taking advantage of vulnerable women in such a situation.

14 thoughts on “Does Islam Allow Sex with Female Captives of War? (Sex slavery in Islam)”