First check out this post on Dhul Qarnayn though.

For the first video, here is a summary 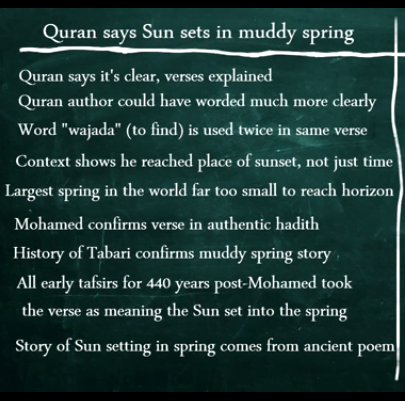 These are some really outstanding points.  Put together, they completely smash the idea that this Quranic story is the truth from God.

One interesting snippet I found was in the video on “does the Quran set into a muddy spring” below, The Masked Arab actually goes through all the early tafaseer and shows that even these early masters of the language and scholars of the religion took the setting of the sun literally. 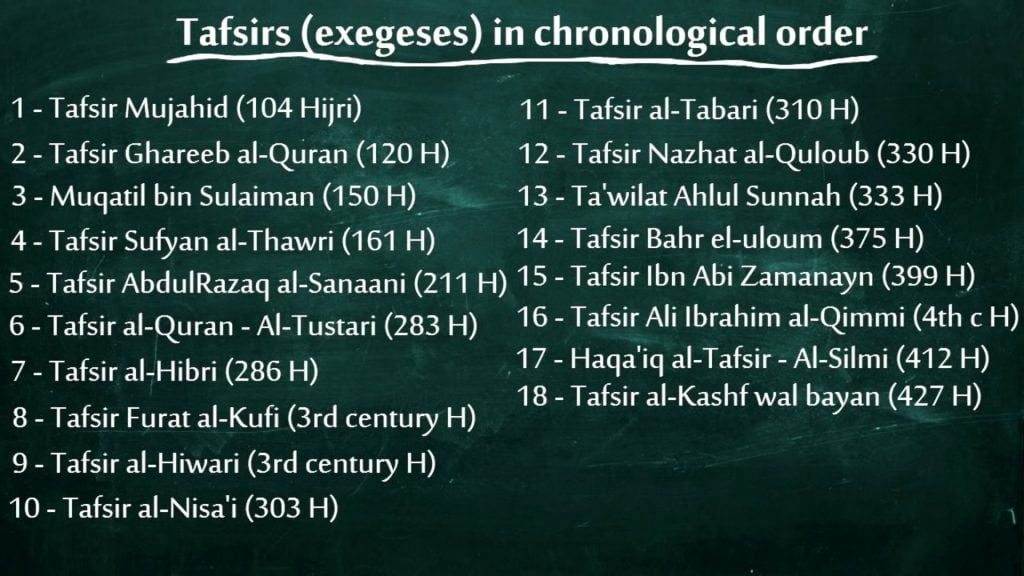 When we look at Tabari (#11 on the list), His tafsir is considered foundational.  Arguably the most credible tafsir in the Quran.  All other major tafsirs like Qurtubi, Jalalayn and Ibn Kathir borrow heavily from Tabari’s tafsir.  What he did is gather all the narrations he could find, and for 18:86 Tabari gathers a 15 narrations from early Islam to describe this single verse.  All Muhammad’s companions took it literally that the sun set to the spring.  The only difference was whether it was warm, muddy, or black.  14 tafaseer later (350 years after Prophet Muhammad’s death) in Tabarani that people started to suggest that it was actually just the perspective of Dhul Qarnayn and the sun didn’t literally set in the sea.  The problem with this Tafsir al-Kabir Imam Tabarani is its controversial and considered a fabrication that was written 500-600 years later.  So on we go, until the 18th tafsir written by at-Thalaby in 427H also has a very interesting point as to where Prophet Muhammad got this idea from! He cites a poem from an ancient Yemeni King Tubba who lived 700 years before Muhammad.

This pre-Islamic poem that Prophet Muhammad surely would have heard said that Dhul Qarnayn reached the west and east… He saw the sun as it was setting into a spring of black mud.

By the 20th tafsir, 440 years after Prophet Muhammad’s death the tafsir  says the meaning of the verse is literal, but it gives a second opinion that says it may be not literal.  450 years later they realized the sun was too big to set in the muddy spring.  Since this book is from God, it surely must contain many signs of it’s divine nature, like facts not known at the time. Rather what see is the opposite, ancient stories that are untrue containing many mistaken ideas written as if they are true stories revealed by God.

What is the point here?  You have someone like Zakir Naik who comes and says we are not understanding the verse correctly, it really means that Dhul Qarnayn saw the sun setting in the sea, it didn’t actually go in there, but when you look and see that is not really what the Quran is saying, its an apologist re-interpretation due to modern scientific knowledge rendering the Quran inaccurate.  So Zakir Naik must understand more Arabic than all these classical scholars combined.

4 thoughts on “Does the Sun Set in a Muddy Spring?”