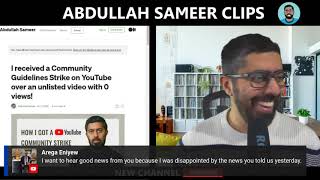 In this podcast I discuss the recent events regarding my main YouTube channel as well as my NEW channel that I will be using going forward.

Here are the timestamps:

0:38 Introductions
1:00 Update on using other social media platforms- TikTok.
2:15 News about the new channel, the hate strike, and why the main channel was flagged for promoting “hate speech”.
6:20 Shout out to David Wood for his support and other Patreons supporters.
6:39 YouTube Ad income and how it works.
8:00 Tanpa Ragi and how his channel was also affected
8:59 Channel memberships and Patreon.
9:38 First warning on the channel – Hassan Radwan’s video.
10:45 Abdullah’s perspective on the idea of switching platforms. Harris Sultan’s dilemma.
12:14 Responding to the comment section.
12:33 David Wood and how Abdullah views his friendship with him.
15:45 Harris Sultan is a millionaire and how easy it is to become a millionaire in the west.
17:48 Mass flagging of ex-Muslim content. EXMNA’s new focus on activism to influence the legislation and tech companies.
21:08 Abdullah Sameer’s experience on TikTok as well as his user handle
23:00 Responding to comments in the chat: Backing-up content, What happened to John Delvanto?
23:40 Name for the new channel. Working together with people who share common goals even though you do not completely align on values.
25:09 Bitcoin.
25:44 Link to the new channel.
26:01 The common trope by religious people of comparing LGBTQ+ people to pedophiles and rapists. The issue of consent. The flaws of religious morality.
27:35 The self-preserving qualities of religions and how atheist activists are fighting against indoctrination and brainwashing.
29:30 TikTok on whether Muslim women feel oppressed by Islam and the responses from Muslim women.
33:15 Responding to the comment section – Abdullah Gondal, thought on breaking fast movies, clickbait featured images and video titles,
37:27 Responding to the claim “You’re trying to gain fame from the LGBTQ+ community” and that Abdullah left Islam didn’t pray properly.
44:15 Divorce under Islamic law.
45:10 Responding to the comment section: Being an inspiration to younger ex-Muslims and Muslims, people’s assumptions on why Abdullah left Islam, zam-zam water.
46:45 The “You were never a true Muslim” and “You’re a fake ex-Muslim” tropes.
48:47 The Hellfire oxymoron. The ridiculous responses that suit such stupid claims.
51:00 Contributing subtitles.
51:50 Signal boosting the new channel.
52:13 Are Muslim parents cruel when they gamble whether their child will go to heaven or not?
54:35 Muhammad’s biological father – Abdullah.
55:20 Responding to the chat: Alcohol
55:58 Risks of revealing real identities of ex-Muslims – coming out as an ex-Muslim.
58:28 Shout out to Bay Yaqeen.
58:40 Does the Gog and Magog story make Muslims stop and think twice? Quran 18/94-97.
1:04:30 Responding to comments in the chat
1:06:40 Masked Arab’s video on Gog and Magog.
1:08:45 Signal boosting the new channel.
1:09:20 Why are secular people pro-choice?
1:10:24 How about making two channels?
1:10:57 Is the sun setting in the muddy water/ocean is a metaphor, then what does it mean?
1:11:26 The scientific miracles in the Quran narrative. Were these texts meant to be miraculous or just descriptive?
1:14:11 Flat earth and Islam.
1:15:17 Shout out to Dolly.
1:15:34 The problem with the splitting the moon narrative.
1:15:48 Quick recap of the stream.
1:17:22 Upcoming content: an interview with Debbie, response to Farid’s interview of my former friend.
1:20:45 The importance of doubt and intellectual courage. Are Abdullah’s arguments special?
1:21:40 Abdullah’s anecdote of inquiring with a Sufi Imam about the flat earth in the Quran.
1:25:12 Final remarks