My friend Sohail is someone who grew up in a strict Salafi Muslim family.  Growing up he struggled to understand why he was attracted to men and felt a lot of self-hate for this.  He thought maybe God is punishing him for committing some sins and desperately wanted to change his sexuality.  This is his story.  If you want to understand a certain group of people, the best way is to talk to them.  Don’t go by hearsay or by what you might think.

Now onto Sohail’s story, here is the original post he made when he came out to family and friends back in September 2014: 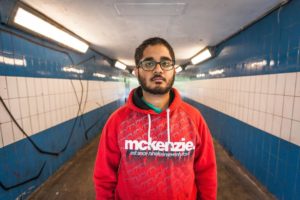 OK guys excuse me for the previous post. But I do have something to tell all of you. I’m gay.

I’ve already come out to around seven of my friends, and they’ve all been really supportive. Thank you all of you. You know who you are.

I’ve known that I was attracted to other guys since about the age of 8. I have never been attracted to girls.

I was brought up in an Islamically conservative salafi background so I always believed gay people were an abomination against God, were destined to hell, were evil people, were the worst people on Earth, were unnatural… etc. I was brought up in a very homophobic environment and I internalised that hate. I hated myself. I became clinically depressed and many times I considered taking my own life, because the pain of living was too hard to bear.

I tried everything to turn straight. I cried and prayed. I begged God everyday to turn me straight. I read the Qur’an, did good deeds, prayed five times a day, stayed up at night in prayer and went to the mosque everyday. I tried talking to girls in the hopes that I would one day become attracted to one.

But obviously, none of it worked. I read the Islamic legal verdicts of scholars on the topic. They told me that there was no such thing as being gay, that it was all from the devil, and that if I married a girl I would turn straight. I believed it all. I didn’t believe I was gay at all. I thought my feelings could one day be overcome. I was even about to marry a girl at one point. Thankfully I didn’t, because otherwise I would have messed up my own life and the life of some poor girl.

It all got so bad that I started self harming. I would burn my my arm with matches. The physical pain would blunt out the emotional pain, and would make everything easier to deal with.

I only came out to myself earlier this year, when I decided to look up on all the research that had been done on the topic of human sexuality. I looked into biology, genetics, medicine, psychiatry, psychology, sociology and embryology. I came to two immediate conclusions after looking at all the science. 1) That being gay was completely normal and 2) you cannot change your sexuality no matter how hard you try.

When I realised this, I thought, “Oh shit. I think I’m gay.” I had just come out to myself. It was one of the most liberating and pleasant experiences in my life. After that I began researching religion and initially I became a progressive liberal sufi Muslim, then a deist, then an agnostic and then finally an agnostic-atheist.

When my parents found out I was gay and that I didn’t believe in Islam anymore they kicked me out of the house. A few days later they called me back home again and made me go to an exorcist. Yes, really, they sent me to an exorcist to get the ‘gay atheist demons’ exorcised out of me. They also exorcised me a few times themselves at home too. Being exorcised was one of the most demeaning, embarrassing and depressing moments in my life.

After a while my parents realised that I wasn’t possessed and that I wasn’t going to change. They told me that I couldn’t stay at home. Now I’m living by myself in Stepney Green, and I’ve made quite good few friends who are very understanding and supportive of me.

It’s been a really long journery for me. But I’m glad I survived it all to live another day. I’ve accepted myself for who I am. If you’re gay and you’re reading this know that it will get better. There is nothing wrong with who you are. You’re an exceptional individual and you deserve love and respect from everyone. Don’t hurt yourself no matter how hard it gets. Trust me, it’s not worth it. If you ever need someone to talk to I’m always here.

Thank you for taking the time to read my story.
Source: Facebook

I have asked Sohail and he personally does not know anyone who choses to be gay.  The problem is, if sexuality is not a choice, why would God punish them for being that way?  Well, Muslims have come up with different ways to understand this. For more about this, see my other post on Homosexuality and Islam