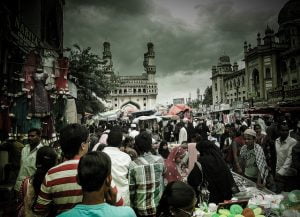 Let me ask you, does that make it true?  Lets say due to some reasons Islam becomes unpopular and Christianity became the fastest growing religion, would this make Christianity true?  Of course not.

We know that the majority of the world does not follow Islam.  4/5ths of the word follow other religions.  Does that make Islam false?  No, of course not.  That would be a silly argument.

But lets look at the facts now about which religious group is growing and why.

Leaving Islam can be detrimental to your health.  It can be detrimental to your well being in other ways – you can lose your family members – your spouse, your children.   According to the hadith literature apostates must be killed.  At the very least, your marriage to your spouse would be nullified and your children would be taken away.  All of the ex-muslims or doubting Muslims I know personally are in the closet.  As of today (January 2017) I personally know that many of them did not even tell their own wife that they had left Islam.  As time goes by if secularism becomes more universal, and leaving Islam becomes more normalized this effect will not be so hidden.

According to PEW Research by 2050 Muslims will surpass Christians as the world’s largest religious group.    Why is this?

The main reasons for Islam’s growth ultimately involve simple demographics. To begin with, Muslims have more children than members of the seven other major religious groups analyzed in the study. Each Muslim woman has an average of 3.1 children, significantly above the next-highest group (Christians at 2.7) and the average of all non-Muslims (2.3). In all major regions where there is a sizable Muslim population, Muslim fertility exceeds non-Muslim fertility.[ref]http://www.pewresearch.org/fact-tank/2015/04/23/why-muslims-are-the-worlds-fastest-growing-religious-group/[/ref]

And also the same thing applies to Muslims who are minorities in countries like India.  They are having more babies

The same dynamics hold true in many countries where Muslims live in large numbers alongside other religious groups. For example, India’s number of Muslims is growing at a faster rate than the country’s majority Hindu population, and is projected to rise from 14.4% of India’s 2010 population to 18.4% (or 311 million people) in 2050. [ref]http://www.pewresearch.org/fact-tank/2015/04/23/why-muslims-are-the-worlds-fastest-growing-religious-group/[/ref]

What is actually the fastest growing religion?  No religion

In countries where there is unrestricted access to information and there is less censorship, you will find a rise in agnosticism and atheism.  This is because religions thrive on lack of information.  Religions cannot survive scrutiny.  This is why Answering Islam, WikiIslam, Faith Freedom and other such sites are blocked in most Muslim countries.  They are scared of people reading both sides of the argument and coming to a rational conclusion.  This is why Muslim preachers warn people from reading sites against Islam incase “Shaytan” will deceive them.

According to National Geographic

The religiously unaffiliated, called “nones,” are growing significantly. They’re the second largest religious group in North America and most of Europe. In the United States, nones make up almost a quarter of the population. In the past decade, U.S. nones have overtaken Catholics, mainline protestants, and all followers of non-Christian faiths. [ref]http://news.nationalgeographic.com/2016/04/160422-atheism-agnostic-secular-nones-rising-religion/[/ref]

As well, atheists tend to be less evangelical about their beliefs:

Only about one-in-ten atheists (9%) say they do at least weekly, while roughly two-thirds (65%) say they seldom or never discuss their views on religion with religious people. By comparison, 26% of those who have a religious affiliation share their views at least once a week with those who have other beliefs; 43% say they seldom or never do.[ref]http://www.pewresearch.org/fact-tank/2016/06/01/10-facts-about-atheists/[/ref]

People naturally tend to become atheists or agnostics after they are exposed to both sides of the argument.  The reason why people find it so hard to leave religion is because of fear of hell and because of desire for immortality.  People want to live forever.  And they want to meet their family members again.  People have a really hard time accepting that death is the permanent cessation of our consciousness.

In this video Theramin Trees explains how minds are groomed at a very young age to not think critically about religion:

Why Muslims are the world’s fastest-growing religious group

6 thoughts on “The Fastest Growing Religion™”